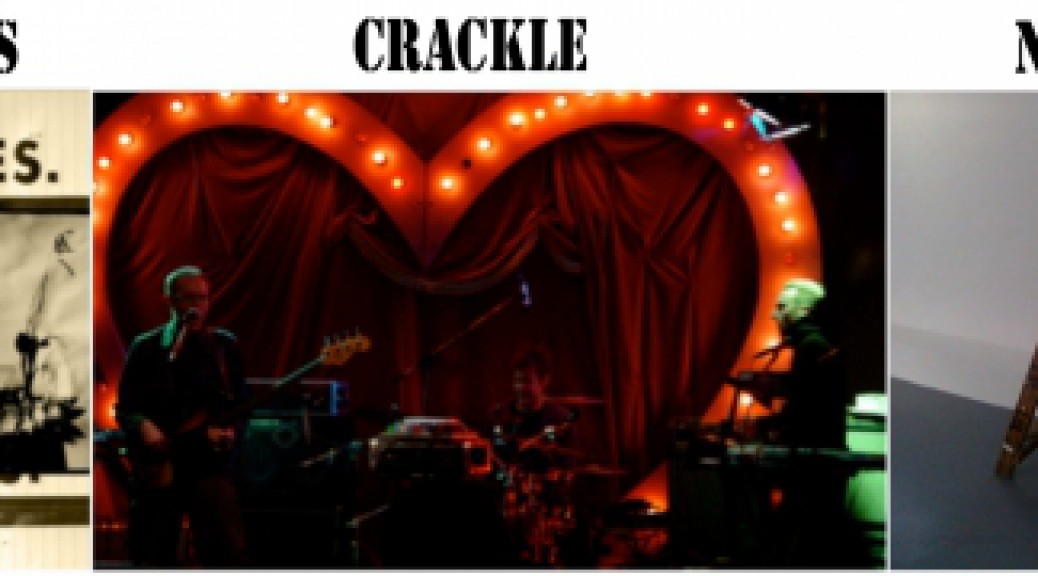 CRACKLE: is an off-kilter collaboration between bass player Nick Doyne-Ditmas and drummer Frank Byng, that draws on their extensive experience as musicians and producers working across a wide range of traditions and practices, old and new. Through a series of studio experiments and improvisations the duo explore the frontiers between analog and digital, acoustic and electric, lo-fi and hi-fi, real and imaginary…Recent addition to the band is Ben Cowen [keyboards], one half of electronic duo 7-Hurtz [Output] and also currently plays with Snorkel and Vibration Black Finger.

HOUSEWIVES: I was in Music Complex, Deptford’s rehearsal studios, buying some drumsticks. From along the corridor I could hear an intriguing and dynamic sound, coming from one of the rehearsal rooms.
“Who’s that?’” “Housewives.” “Who are they?” “Local band, playing Bird’s Nest next week.” So I went to the gig, but they went on early and I missed them; total piss off.
Couple of weeks later I’m in Music Complex again, sound along the corridor. “Is that Housewives?” “Finger on the pulse, sir.”
They come along to the reception area for a break, we get chatting. They’re playing 2 weeks time at Old Blue Last, and by the way, here’s a soundcloud link.soundcloud.com/housewivesband
Far out. 2 weeks later I’m at Old Blue Last to hear Housewives. Far out. A sort of monochromatic surliness slowly warms up to a barely controlled anger, hypnotic and building from the simplest elements. Far out. I want to hear more of this music.

NECESSITY: The power trio re-configured for the age of social and emotional collapse. 3 generations of underground noise makers collaborate in the unending struggle with the mainstream subconscious infrastructure.
Alex Ward plays guitar. Eric Clapton was never ever God. And anyway, God is dead.
Nathan Harmer plays found and abandoned sound.
By the way, beneath the pavement, the beach.
Charles Hayward plays drums. It’s a life. Keep going.
Their first CD Strip Search will be released in the new year.
So fresh it’s off the map. Click here for eternal youth.