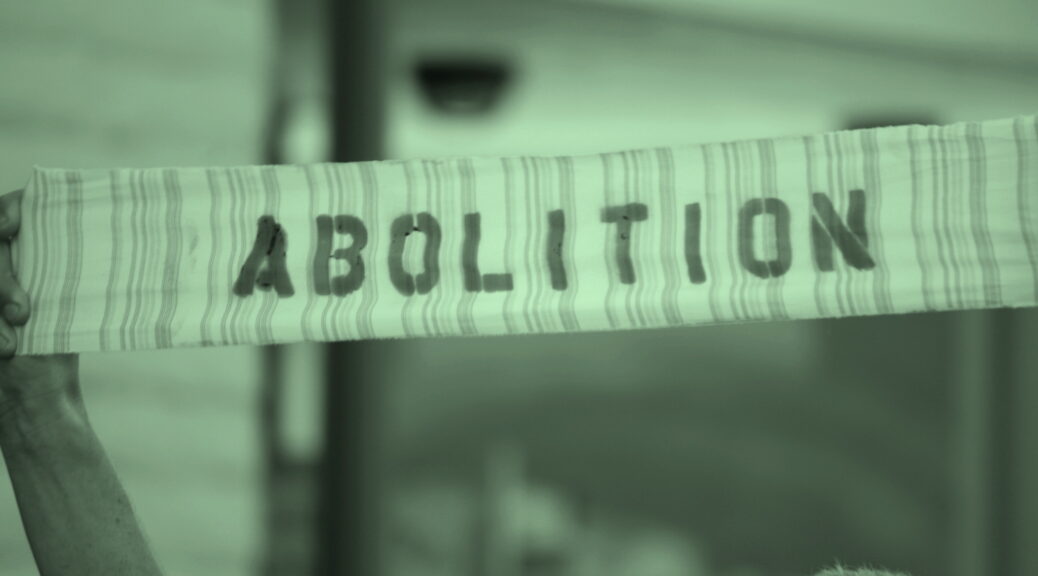 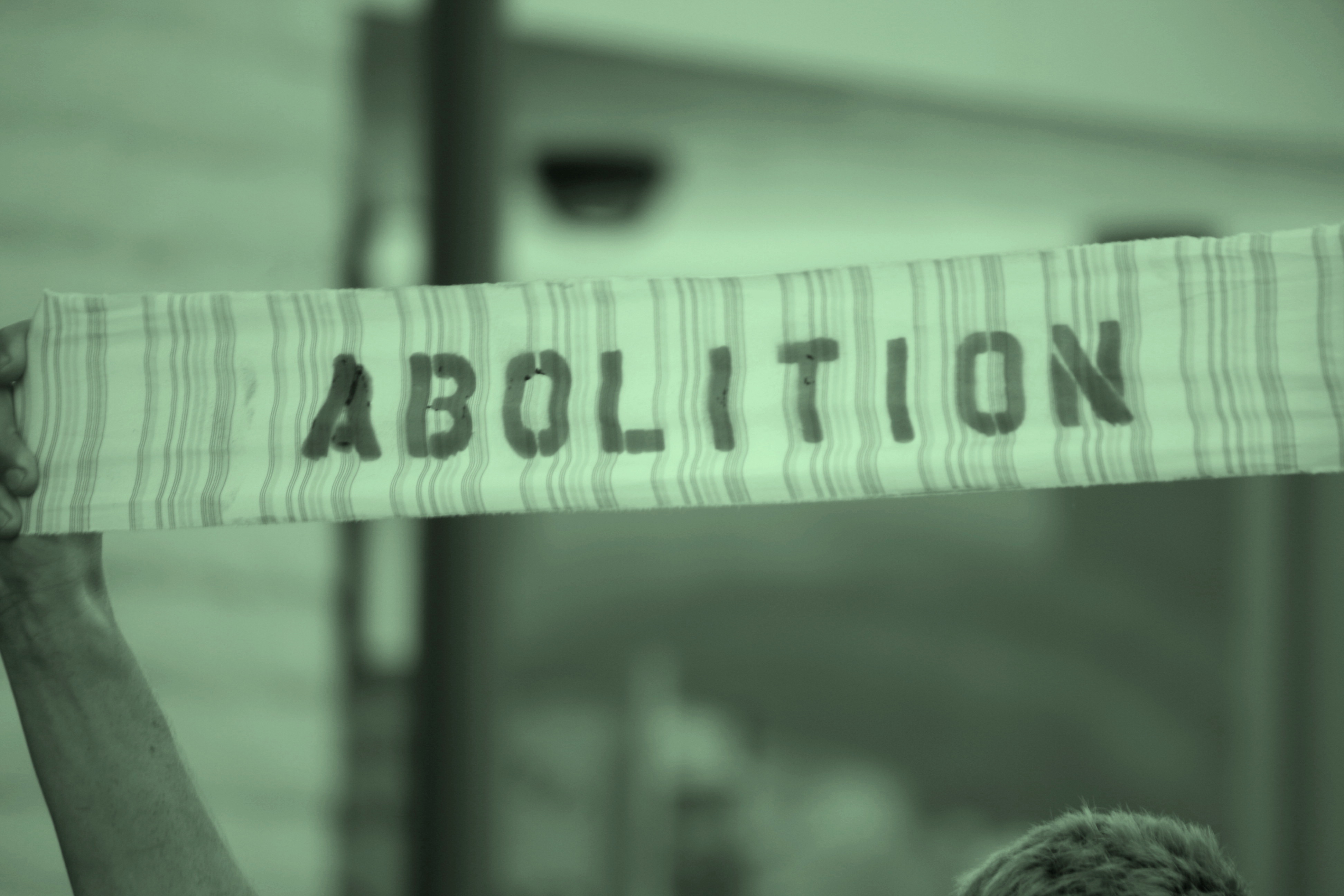 The prison abolition reading group is hosted by Lewisham Arthouse as part of our public education programme, using a format and reading list set up by Abolitionist Futures. It is initiated by Ruth Beale as a member of the Lewisham Arthouse cooperative’s Education group. Arthouse member Richard Parry asked Ruth some questions about the group:

So, Ruth, please can you tell us about the reading group and explain some of the key terms?

The reading group is a chance to learn and think together about prison abolition. Abolition is a movement which says that prisons are not benefitting society: it’s not about closing prisons tomorrow, but about examining the systems we have and reimagining a world that doesn’t need prisons. This intersects with radical, anti-racist and feminist work, and has frictions with political ideologies of the left and right. So these are big, sometimes challenging ideas, and which are great to discuss and explore with other people.

Abolitionist Futures is a group of activists who have put together a fantastic reading list and structure to hold a reading group – so we are using this list and format to host the group.

Why did you want to facilitate the reading group with Lewisham Arthouse?

I did a project with Mansions of the Future in 2019/2020 where I worked with prisoners at HMP Lincoln to make a sci fi radio drama. It was my first experience of the prison system and a huge learning curve. At the end of the project in September last year, I held an event with John Bowden from Prisoner Solidarity Network and Criminologist Lisa White, where we talked about incarceration, power and the state. I came away wanting to learn more about abolitionist ideas.

Being in lockdown in the winter seemed like a great opportunity to start a reading group online, as part of Lewisham Arthouse’s public programme. As members of the cooperative, we encourage and support each other to initiate things which benefit and interest our communities in Lewisham and beyond. Thinking of our geography – in London there are currently 8 prisons, including a complex of 3 prisons in Thamesmead in our neighbouring borough of Greenwich. It has also of course been a time of calls to defund the police, in the wake of police violence and the Black Lives Matter movement. I thought it could be a chance to educate myself and have this dialogue with other people who are interested in it.

Who has been coming? What had the group been like?

Some people have come to all sessions and some have come just for one or two – some are based in South East London, some are Arthouse artist members, and some from across the UK and even Switzerland and Sweden. People have come to the group with different knowledges and experiences but none of us are experts – I think there has been a really good sense of arriving with an open mind, of unlocking things and listening to what other people have to say.

What role do prisons serve? Please could you respond to the possibility of a prison preventing more harm than it embodies?
I think you’re asking if prisons prevent harm by removing and rehabilitating prisoners? But also referring to the possibility that they do harm through traumatic, dehumanizing conditions. Speaking for myself, I think prisons are modelled on several ideas: punishment (through the removal of liberty and becoming powerless, but also in practical terms of making people suffer through poor environments, food, and punitive measures, as well as things like taking away voting rights), protection (with the idea of removing dangerous people from society) penance (paying for what you have done) and rehabilitation/reform (the idea that prisoners will change then rejoin society). I personally think all of these ideas are very muddled in the British psyche, and we have to interrogate where they have come from – enlightenment ideas about freedom; Protestant Christian ideas; Victorian ideas about class and criminal classes; how the state serves capitalism.

One of the sessions was about reform Vs abolition – the idea that well-meaning reform (often led by liberals) can actually strengthen the prison system rather than weaken it. I found a comparison with mental health institutions very interesting – people with learning disabilities, genetic disorders and mental health problems used to be institutionalised, often in horrific circumstances. But now we recognise this as cruel and wrong. Are prisons really the best place to send people struggling with addiction for example?

What other disciplines and activist movements does prison abolitionism draw from?

The big movement which prison abolition developed from was the black feminist tradition in the USA: women literally looking at the incarceration of their sons, husbands, brothers and saying ‘this is not right’. And that itself came out of the civil rights movement, taking emancipatory forms of social organisation to end violence. We listened to a podcast by Ruth Wilson Gilmore, a really key figure in the movement, who writes and talks about “abolishing the conditions under which prison became the solution to problems.”

Have you encountered any interesting disagreements or misconceptions within the group?

We’ve been aware of the number of US-related resources, although there are UK resources too. It can be a challenge to make that leap to think about the UK context, but there are links – racism and classism also define the system here. I think we’ve also felt a tension about the jump between the theory and how we see it working in practice. The session on transformative justice was particularly interesting to me – this is difficult work fraught with its own challenges. How could we make this fair and compassionate? How might people devote the time and skills to these processes? How would we ensure that this won’t enable harmful behavior in the community?

How do you regard the police personally? Are there any good police officers?

Something thing we talked about in one of the groups was the idea of safety – that police are there to make us ‘safe’. But this is not true for many marginalised people. So I have to check my privilege, given that my identity and socialisation as white woman means I have not had a lot of interaction with the police in my life. I also know a few people who work on the police, including people I went to school with, and think they come from a place of wanting to do something positive, of civic duty – and what they do is complex and difficult. They do all sorts of social work they shouldn’t be doing and are not trained and equipped to do. At the same time, I think the police dehumanises people who serve in it, there is systemic racism made evident in many ways including Stop and Search, and there are frightening moves to shift power to the police away from people through the Police, Crime, Sentencing and Courts bill… So yeah, someone might be a moral person, or good at their job, but the problem is systemic.

Should we view the culture industry through the lens of prison abolition?

That’s not something we’ve looked at specifically, but we did read about ‘industrial complexes’ – this is the idea that under neoliberal capitalism, businesses become entwined in the social or political institutions. So the privatised prison system has become a self-sustaining prison industrial complex, where prison expansion becomes a self serving process, of profit for contractors, rather than based on what is good for society. If we are to consider the culture industry as an industrial complex, then we should look arts funding, sponsorship and the market. Also in a bigger way, we need to question what/who defines art/culture, and who it serves.

There are two sessions left in the series, and the subject matter relates very much to the current situation and local and global events in the past 18 months – on 22nd July we will look at Abolitionist Mutual Aid and Responses to COVID-19. The last session on 26th August will look at Black Lives Matter and Defund the Police. All the reading materials are free and available online and everyone is welcome to join.