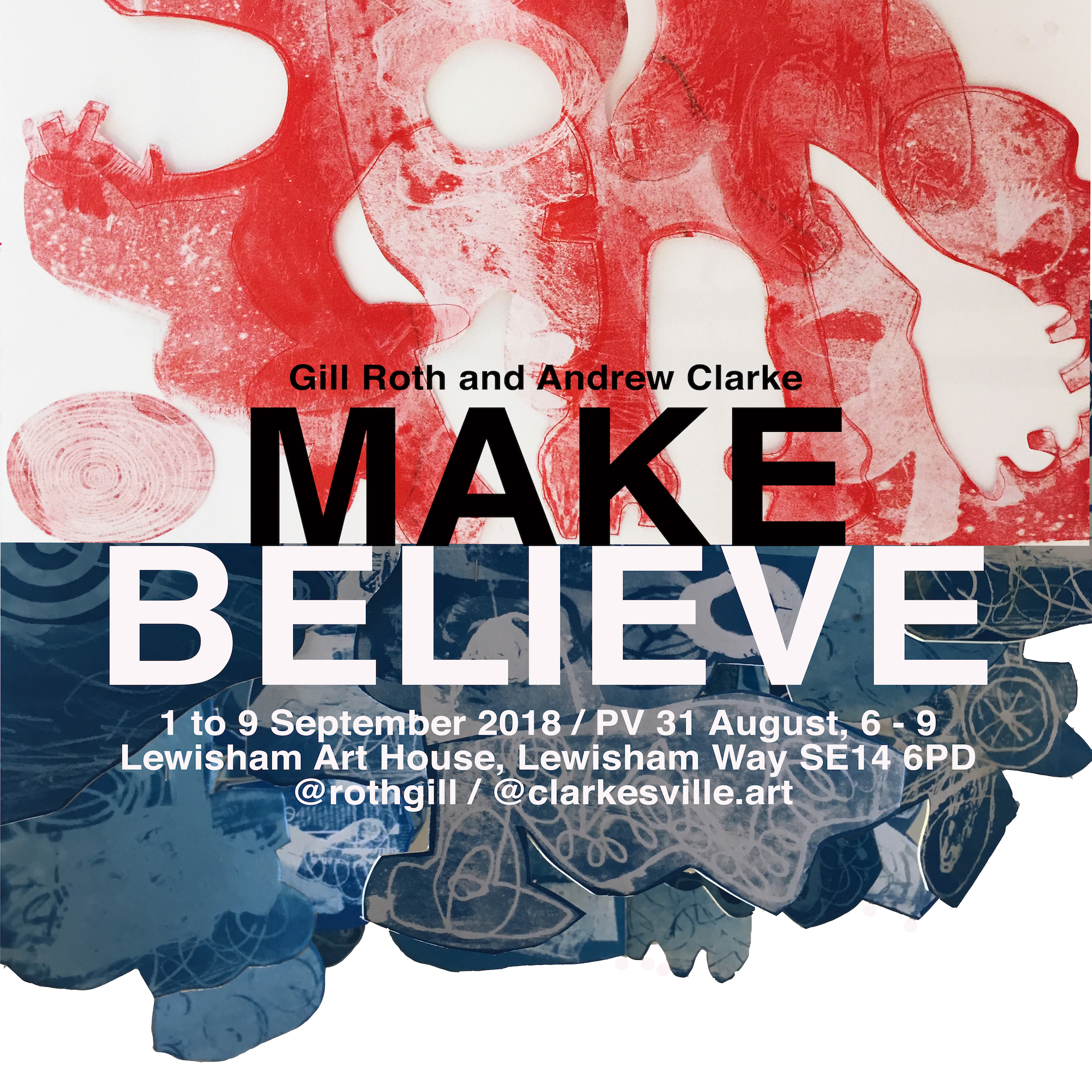 Gill Roth and Andrew Clarke met at Maidstone College of Art in the 1980’s. They have lived in Lewisham for over 15 years, taking part in local Open Studios. This is their first joint exhibition.

Both Gill and Andrew make work that blurs the edge between abstraction and representation, where the observable world meets the environment of the imagination.

While drawing forms the core of Gill’s practice, Andrew’s figures emerge through a process of collaging and assemblage. Both work on paper in a way that embraces intuition, accident and play with recurring motifs hinting at inner bodily functions or states of mind.

Andrew makes collages and objects through the juxtaposition of drawings, prints and found material. By relinquishing elements of control and intentionality, new forms and ideas are allowed to emerge more freely. A line in one image continues into a line on another, overlapping shapes create unexpected negative space, a drawn mark reflects a found object. The figures and faces that emerge through these processes are often cut away from the rectangle in a way that ‘sculpturises’ the two-dimensional image and emphasizes the outside line. This has led to a move towards larger scale assemblages and three-dimensional work.

“As a printmaker I often prefer the bits that are left over in the process; the stencils, the plates and the happy accidents. It is often these unplanned images and objects that inform my next move.”

His use of cyanotype introduces the element of light through material that creates ‘X-rays’ of existing collages while also revealing previously unseen textural nuances. The process unifies the image into one colour shifting the focus from the original materials to line and form.

For Gill drawing is a starting point and an end in itself. She works on paper in a relatively large scale. There is nearly always a human presence in her work whether it’s the limbs of a life model or the limbs of a tree thrusting up into the sky.

“I often start with a ‘blind’ drawing. Not looking at what I’m drawing helps me not to think too much and often produces interesting accidents and an element of chaos.”

Gill is attracted to shapes that express movement or have an inner energy, vitality and surface tension. She uses and reuses organic shapes and universal motifs such heads, hands and feet. Tracing, flipping and repeating shapes in a process of organising and editing towards a finished piece.